Imagine we go to the fascinating amusement park. There is a snaking line in a thrill ride, yups it is Roller coaster. I am personally too afraid to play this adrenaline-pumper game, but we all agree that Roller coaster has up and down maneuver, speed, and period until it ends. It is quite like mining industry behaviour. One day the business is attractive, but in another day the business is possibly sluggish. Then, the managers should cudgel their brain to keep the cash flow stay positive.

I still remember in 2011, coal price reach its peak. Mining companies gained high profit, operating cost was not a serious concern as long as they were able to extract and sell the coal. In Indonesia, as a result there were a huge number of Mining Permits were released. In total, 2,528 coal Exploration permits and 1,358 Production permits, plus unrecorded illegal mining operation. Moreover, mining engineering student got the job soon after their graduation, even it was normal they worked in mining industry although they had not been graduated. The labor market was pretty hot. Unfortunately, it was not long last. The coal price began to reach its diminishing return and drops to the lowest point afterwards. Next, the coal price increased reluctantly. De Heer and Koller said, the upstream companies, mining industries for instance, show more cyclicality in performance.

Business behaviour not only performs growth in progressive and positive way, but also in slow growth even negativity in its revenue (e.g. mining company in exploration until development phase). The reason why the business possibly goes up and down, mostly because of price instability, the other factors may contribute are policy, demand, or commodity scarcity. Supply- demand factor can be one another significant factor, but the precise reason more than that. This condition is also known as cyclical behaviour.

For that reason, business valuation technique in the mining industry should be distinguished in term of its behaviour. That unpredictable behaviour is also called cyclicality. It has up and down movements, low and fast speeds, and periods until it ends. Furthermore, in one cycle is broken down into four phases (Hickernell, 1922; Schumpeter, 1939).

First is the boom phase, companies gain the maximum benefit (e.g. high commodity price or excessive demands). The benefits received can be projected in the company revenue. This phase may leave the companies satisfied with their performance, and the companies will not care very much about operating cost and capital cost as long as they are still able to generate profit. In addition, some companies expand their business in this period by acquiring another company, diversify, build a new company, or conduct an aggressive exploration.

The second phase is recession. When the peak has been reached, usually it will not continue long. Soon after the graph goes down. The downturn may possibly be temporary, but sometime it may result in the worst scenario. Companies that cannot maintain a well-managed corporation will become bankrupt soon.

The third phase is depression, when the companies hit rock bottom, i.e. the lowest point of business. This happens when commodity price drops significantly and the companies do not have the specific policy to deal with it. In other words, it is like the boom phase in reverse.

Finally, the phase when the companies show a rise is commonly defined as recovery. In recovery, some companies may reach the previous highest point. However, well-established and stable companies may achieve a new record, higher revenue or lower operating cost. 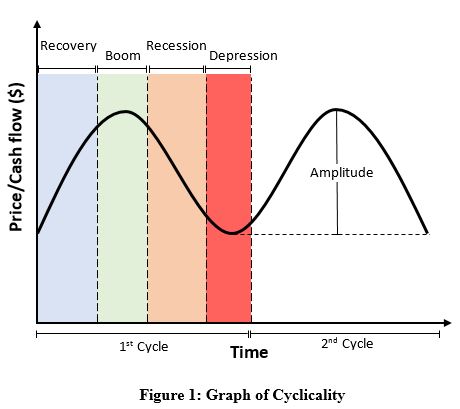 Figure above illustrates the cyclicality performance. From recovery to Depression is defined as 1 cycle. In real life, every phase may happen short or long term, then in 1 cycle can be done from 3 to 60 years. Also, the amplitude as unpredictable as the length of every phase. Thus, this uncertainty is interesting to discuss.